This is a big step in the right direction for a locally family owned and operated company. Although there is a large initial capital investment to make this change, HGR feels our customers and environment are worth it.

“Our trucks drive by, idle, stop and start in front of every customer’s house every week, year around. The CNG trucks are much quieter than normal diesel trucks, plus clean air matters to our customers as much as it does to us and they will see us reducing those diesel soot and particulate emissions every week. And, the global warming gas reductions, although invisible, show up too. This is the right thing to do and it costs less in the long run. That savings is also passed onto our customers in the rates.”

This Is A Success Story...

Where a cleaner fuel is less expensive, better for our community health and air quality all while reducing global warming gas emissions by as much as 25%. Fuel cost savings of up to a dollar, per gallon equivalent, add up quick when your typical refuse truck runs 12,000 miles per year, at between two and three miles per gallon. By the end of 2015, Heiberg’s CNG fleet will be displacing over 60,000 gallons of petroleum diesel annually (10 trucks @ 4,700 DGE/yr) with cleaner burning, lower cost, North American CNG. That amount will grow each year as new CNG trucks are added and will be over 100,000 gallons of diesel displaced each year in 2020.

At this fleet average fuel use, the carbon dioxide (CO2) emissions equivalent (global warming gas) reduction per truck is estimated at 1 ton per year[1]. Nitrogen oxide (NOX) emissions reductions are estimated at just under a half a ton per year per truck while carbon monoxide (CO) reductions are expected to be over 150 pounds per year. Other pollutant emission reductions include particulate matter and volatile organic compounds.

The Lower Fuel Cost, Cleaner Combustion And Lower Emissions Benefits Are Already Being Experienced By HGR And It’s Customers. Some of those benefits

Case Studies And Research On Economics And Benefits of CNG 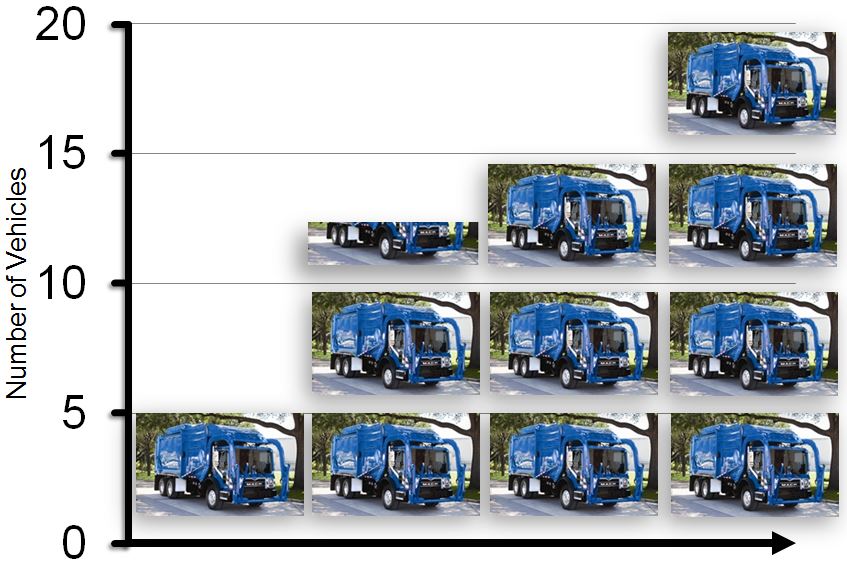